A Dictionary of Ashkenazic Given Names: Their Origins, Structure, Pronunciation, and Migrations 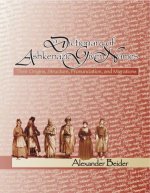 This comprehensive book showcases the author's mastery of Eastern European Jewish onomastics, history, linguistics, and migrations. The author carefully considers the origins of the Central and Eastern European Jews as well as the origins of Yiddish, the dialects of Yiddish, the non-Yiddish languages spoken by Jews in Europe, and the origins of given names used by Jews. He draws from his knowledge of Slavic languages as well as other knowledge, plus a vast number of source documents, tombstone inscriptions, and secondary literature.

Chapter 5 is titled "Origin of Ashkenazic Communities" and extends from page 152 to page 213. This chapter is very thorough in its coverage and ends with a beautiful map entitled "Chronology of Migrations". Beider provides an interesting summary of a book by Eckhard Eggers, "Sprachwandel und Sprachmischung im Jiddischen" (Frankfurt: Peter Lang, 1998) and also evaluates the ideas of Yiddish linguists like Dovid Katz, Alice Faber, Robert King, etc. Beider provides evidence that Ashkenazic Jewry derives from a combination of Ashkenazic (German Jewish), West Canaanic (Czech Jewish), and East Canaanic (Khazarian Jewish and other groups) elements. He gives his perspectives on questions like: Did some German Jews come from France? Is Yiddish mostly Rhenish or mostly Bavarian or a combination of multiple forms of German? Were Bavarian Jews related to Rhenish Jews? What are the origins of Slavic-speaking Jews? The author admits that he is a disciple of the great Yiddish linguist Max Weinreich, but the author examines Weinreich's ideas objectively and indicates points of agreement as well as points of contention.

The dictionary is an impressive part of the book. More than 15,000 given names - derived from 735 root names - are listed and discussed. (Examples are men's names like Ruvn, Benyomen, Fishl, and Shemtov, and women's names like Rokhl, Malke, Sheyne, and Sora.) Each root name includes a detailed description of the origin (etymology) of the name, a list of the variant and derivative names displayed in a scheme that reveals how the variants evolved, and references to the more than 15,000 variations of the root names throughout the centuries - some dating back to the 11th century. An index to the 15,000 variations guides you to the proper root name.

The book may be helpful in breaking down the brick wall caused by Eastern European Jews not having surnames prior to the 19th century. Because this book identifies a given name in a specific place at a specific time it may provide a clue as to the early origin of ancestors.

There are entries for many names used by Kievan Jews and Khazarian Jews including Gostyata, Khanuke, and Peysekh.

This is an expensive book, but the text, lists, and maps are well worth the price.

"Dr. Beider's linguistic analysis of Ashkenazic given names is a substantial contribution to Germanic as well as Slavic linguistics in general, and Yiddish linguistics in particular. The diachronic analysis of these names suggests strongly the need for the reevaluation of Jewish demography and migration patterns in medieval and early modern Europe, to be taken into account by any future investigation." - Yaacov (Jacob) Guggenheim, Germania Judaica, Hebrew University

"Dr. Beider's new dictionary of given names, covering a period from the beginning of Ashkenazic Jewry, fills an important research gap and represents a magnum opus. The author attains an admirable degree of completeness in the widely dispersed source materials, and the text of the articles is of perfect transparency both in the presentation of the materials and in the explanations." - Erika Timm, Professor of Yiddish Studies, University of Trier

"Alexander Beider's latest book on Jewish names is a real tour-de-force, a major contribution to onomastics with wide-ranging applications to several other fields as well. The author ingeniously makes use of first names in the service of 'linguistic archaeology', and this method has enabled him to trace migratory patterns that are not otherwise discernible from archival documents. The publication of this important work is cause for genuine celebration." - Zachary M. Baker, Reinhard Family Curator of Judaica and Hebraica Collections, Stanford University Libraries

"Like his ancient namesake, Beider -- a Moscow-born Jewish emigre living in Paris -- is proving a skilled and savvy conqueror who has marched from one province of Jewish names to the next in a bold scholarly campaign to illuminate their various etymologies.... To compile the dictionary, Beider mined names from hundreds of historic sources, including ancient tombstones in Israel, lists of medieval European epitaphs, and records of anti-Jewish persecutions in medieval Germany. He studied and assessed the work of previous scholars.... He seems particularly skilled at untangling historic inaccuracies and overlapping levels of meaning that seem to confound the origins of certain names.... His research into Jewish first names also led him to question what many Jewish historians have long held as fact -- that the Jews of Eastern Europe were descended from the earlier Jewish settlements in the Rhineland. ``This idea is very simplistic'' and accounts for only part of the picture, he says. ``It should be nuanced.'' Essentially, Beider found that Jews from Bohemia and Moravia -- the modern Czech Republic -- ``played an exceptional role'' in the establishment of the vast Jewish civilization that spread out across what is now Poland, Lithuania, Belarus and Ukraine. Historians have yet to appreciate the large influence played by the Czech Jews on these later settlements, he says." - Bill Gladstone, Jewish Telegraphic Agency (November 21, 2001)

Books of related interest by other authors:
The Jews of Khazaria
Medieval Ashkenazic History: Studies on German Jewry in the Middle Ages
Abraham's Heirs: Jews and Christians in Medieval Europe
A History of East European Jews
The New Joys of Yiddish
Jewish Family Names and Their Origins: An Etymological Dictionary