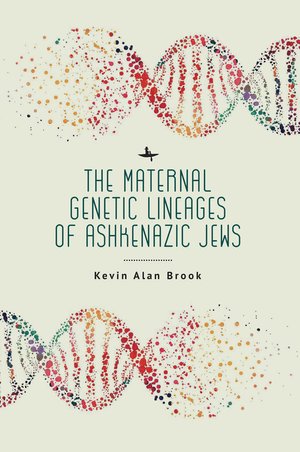 This book presents up-to-date information on the origins of the Ashkenazic Jewish people from central and eastern Europe based on genetic research on modern and pre-modern populations. It focuses on the 129 maternal (mtDNA) haplogroups that the author confirmed that Ashkenazim have acquired from distinct female ancestors who were indigenous to diverse lands that include Israel, Italy, Poland, Germany, North Africa, and China, revealing both their Israelite inheritance and the lasting legacy of conversions to Judaism.

Genetic connections between Ashkenazic Jews and other Jewish populations, including Turkish Jews, Moroccan Jews, Tunisian Jews, Iranian Jews, and Cochin Jews, are indicated wherever they are known.

Each maternal haplogroup originated from a distinct woman who joined the Ashkenazic community. Some of these women were Judeans, some were Slavs, a few were Berbers, and several may have been Greeks—and those weren't their only origins.

Multiple Ashkenazic maternal and paternal haplogroups most likely came from Khazar and Alan converts to Judaism in medieval Khazaria. See the evidence on pages 7, 16-17, 52, and 85-86.

Two of the maternal haplogroups discussed in this book (H2a1e1a and U5a1d2b) were discovered to exist in Ashkenazim by the author and were not in any previous work about Ashkenazim.

"The book ... conveys to the citizen-scientist an encyclopedic reference combining a comprehensive wealth of DNA sequence signatures collated from seminal scientific publications and genealogy databases to trace shared maternal ancestral lineages of contemporary Ashkenazic Jews. A major attraction is the way in which Kevin Alan Brook couples the lineage moniker with carefully investigated community historical information. This allows the interested reader to fit his/her affiliation within the relevant demographic tapestry. The numerous upheavals that characterized the origins and history of Ashkenazic Jews are related to the catalogued DNA sequence patterns. Recent scientific reports of genomic DNA sequence data, including mitochondrial DNA from remains at a medieval Jewish burial site [in Erfurt, Germany], add further credence to the patterns elucidated in Kevin Alan Brook's tour de force."
— Karl Skorecki, Professor and Dean of the Azrieli Faculty of Medicine, Bar-Ilan University, a co-author of many scientific papers on Jewish DNA including "The Genome-Wide Structure of the Jewish People" (2010) and "Counting the Founders: The Matrilineal Genetic Ancestry of the Jewish Diaspora" (2008)

CHAPTER 1. An Introduction to Ashkenazic History and Genetics
Early settlements, migrations, and subgroups • An overview of Ashkenazic autosomal DNA and Y-DNA • Conversions to Judaism and intermarriages between Jewish men and non-Israelite women in Western Jewish communities

Notes
Bibliography
Index
About the Author

Some of the following links are monetized thru Sovrn Commerce to support this website's continued operations.


HOW TO ORDER
"THE MATERNAL GENETIC LINEAGES OF ASHKENAZIC JEWS"

Also available from your local bookstore by special order. If ordering the paperback format, be sure to specify ISBN 9781644699843.

The author's other book of related interest:
The Jews of Khazaria by Kevin Alan Brook