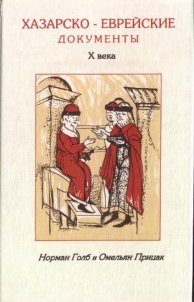 Originally published in 1982 in English under the title "Khazarian Hebrew Documents of the Tenth Century", "Khazarsko-yevreiskie dokumenty X veka" is a 1997 Russian hardcover edition which contains not only a translated text but also new materials. The Russian edition is published by Gesharim Publishing House of Moscow and Jerusalem and is 239 pages in length, including photographs and maps. The first printing was in 1997 and has the ISBN 5734900311. The second printing was in 2003 and has the ISBN 5932731265.

All three authors are prominent scholars in their fields. Norman Golb is a professor at University of Chicago and has written several studies on the Dead Sea Scrolls, the Cairo Genizah, and the Jews of France. Omeljan Pritsak, author of "The Origin of Rus'" (1981), "The Origins of the Old Rus' Weights and Monetary Systems" (1998), and numerous articles in multiple languages, is a Ukrainian professor of history. Vladimir Iakovlevich Petrukhin is a professor in Moscow and has written several articles (in English and Russian) on Rus-Khazar relations, the Khazar contribution to Kievan Rus' society, and Khazar and Slavic artwork and customs.

"Khazarsko-yevreiskie dokumenty X veka" contains full translations of the Kievan Letter and the Schechter Letter (Cambridge Document), two Khazar documents which illuminate Khazarian society and history. Following the translations are commentaries by Golb and Pritsak on linguistic and historical issues, such as the Khazar occupation of Kiev, the military victory of the Khazars against the Rus under General Pesakh, and the origin of the mixed names in the Kievan Letter. The special aspect of this Russian edition which distinguishes it from the English edition is the new commentary section by Vladimir Petrukhin, which was translated from English into Russian by Vsevolod L. Vikhnovich.

Unfortunately, the English edition - "Khazarian Hebrew Documents of the Tenth Century", released by Cornell University Press in 1982 - has been out of print since April 1993. Only the Russian edition can currently be purchased from any new bookstores.

"[This is] one of the most intriguing and controversial topics in medieval Jewish history.... Golb and Pritsak, in a collaborative effort which combines their expertise in Hebrew philology and Eastern European history respectively, have made a significant contribution to the subject.... In their work, the authors combine precise philological detective-work with solid historical analysis to prove the authenticity of the Khazarian Hebrew documents and their reports of a Jewish kingdom of Khazaria, which persisted until the tenth century." -- Ira Johnson, in Journal of the American Academy of Religion (1984)

"Norman Golb and Omeljan Pritsak now present two Hebrew texts... The first manuscript, referred to as 'the Kievan letter,' is 'the earliest original document in any language containing the name Kiev.'... The second document -- known as the 'Schechter text' (an anonymous Khazar's epistle to Hasdai ibn Shaprut of Cordova) --is a fragment dating from the mid-tenth century. [The] book includes photocopies of both manuscripts, along with printed Hebrew texts of the same documents, accompanied by Golb's new English translations on the opposite pages. Paleographic and textological analyses follow, which argue convincingly in favor of both texts' authenticity. Each document is then fitted into a broader historical background, to produce most interesting conclusions... We... find their thesis plausible: 'Khazars who adopted Judaism . . . came to form a part of the Ukrainian component of eastern European Jewry . . . eventually to be assimilated by it.' This is an intermediate view, between the claim that only a few, high-ranking Khazars adopted Judaism and the opposing hypothesis that large numbers of Ashkenazim are descended from Khazars." -- Horace W. Dewey, in The American Historical Review (1983)

"...[Khazarian Hebrew Documents of the Tenth Century] puts to rest whatever lingering doubts one might still entertain regarding the Khazars' relationship with Judaism and the contemporary Jewish world. The collaboration of two eminent linguists and historians like Golb and Pritsak has resulted in the final and most authoritative edition, translation, and explanation of the two key Hebrew documents [the Kievan Letter and the Schechter Text] which were found in the Cairo Geniza... The authors' well documented arguments leave no doubt about the authenticity of both these documents. Pritsak's brilliant linguistic comments explain the origin of the Turkic names found in the documents, and at the same time give a persuasive historical reconstruction for a period and a geographic area that still need thorough investigation." -- Vera Basch Moreen, in The Jewish Quarterly Review (April 1983)

"[T]he publication of a new and important source, a tenth-century Khazarian Hebrew document from Kiev, is a truly important event.... Golb and Pritsak have rendered an invaluable service to Khazar and Rus' studies in not only preparing excellent editions and translations of two important sources, but also in providing commentaries to the texts that are both richly informative and thought-provoking. Even when disagreeing, one is compelled to rethink many problems and this is all to the good... In any event, the work stands as a landmark in Khazar, early Rus', and East European Jewish studies." -- Peter B. Golden, in Harvard Ukrainian Studies (December 1984)

"The book... has much to offer to Hebrewists, historians of religion, and even researchers of Khazar history." -- Lajos Ligeti, in Acta Linguistica Academiae Scientiarum Hungaricae (1981)

Ordering option(s):
Sorry, this book is out of print as of July 2011.
But you can search Abebooks, search Alibris, and search Biblio for used copies of the English edition.

As of March 2020, 7 new copies of the Russian edition are still in stock at the Canadian bookstore JewishBook.ca (Yevreyskaya Kniga Na Russkom)