Map of the Khazar Empire in the early 10th century.

Map of the Crimean peninsula during the Khazar era. 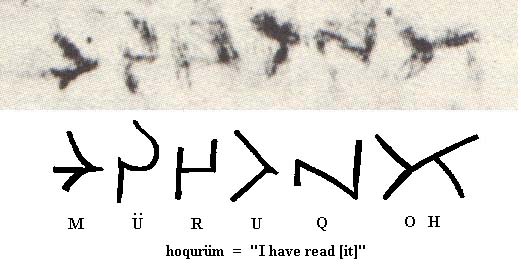 This 6-letter Khazar runic word means "I have read [it]". It was written on the bottom of the Kievan Letter, a document written by the (possibly-Khazar) Jews of Kiev in the early 10th century. The signatures on the Kievan Letter are of mixed Hebrew (ex: Yitzhak, Sinai, Yehudah) and Turkic/Slavic (ex: Manas, Gostata) origins; some scholars suggest that this indicates that the conversion to Judaism in Khazaria extended beyond just the ruling elite, while others point out that Israelite Jews throughout the diaspora adopted local non-Jewish names.

Engravings resembling the Jewish Star of David were unearthed at two Khazar sites, one along the Donets River in eastern Ukraine and the other along the Don River in southern Russia. This one is a circular metal disc, interpreted by Professor Bozena Werbart of Umea University as Jewish but seen by others as shamanistic or pagan. The circular nature of the disc may represent the sun, and the 6 points may represent rays of the sun. Scholars lean towards assigning the disc to Tengri shamanism due to the fact that there are also known examples of Khazarian sun discs with 5 or 7 points, rather than consistently 6. Some of the Jewish-Turkic graves at Chelarevo in what used to be Hungary contain engravings of the Star of David and are believed by some to belong to Khazar Kabar migrants. However, the claim that the Star of David first became a symbol of Jewish nationalism in Khazaria is by no means certain.

Amulets unearthed at cemeteries in the Khazar Empire.

This is the uppermost part of a Khazarian scoop (dipper) manufactured from silver in the 8th or 9th century and discovered at the town of Kotsk in western Siberia. It depicts a Turkic wrestling motif. (Source: Stepi Evrazii v epokhu srednevekov'ia. Moscow: Nauka, 1981, page 163.) Natalia A. Fonyakova compared the scoop's hunting and wrestling scenes with written notes by the 7th-century Chinese pilgrim Hsuan-Tsang and concluded that the scenes depict the Khazar kagan in a fight for power. (Source: Fonyakova, "Izovrazhenie odnogo zabitogo obichaya na xazarskom sosude iz Kotskogo gorodka" in Donskaya Arkheologiya, 2001, No. 3-4, pages 67-71.) 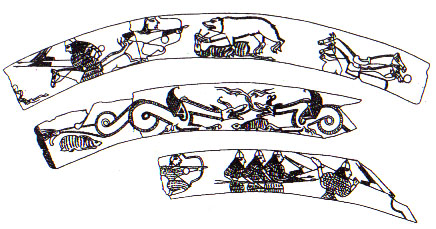 These horn plates from near Shilovka portray traditional Khazarian themes such as war and hunting. Among the animals portrayed are horses, rabbits, dragons, and a bear. (Source: Svetlana A. Pletnyova, Ocherki Khazarskoy Arkheologii. Moscow: Gesharim, 1999, figure 119.) 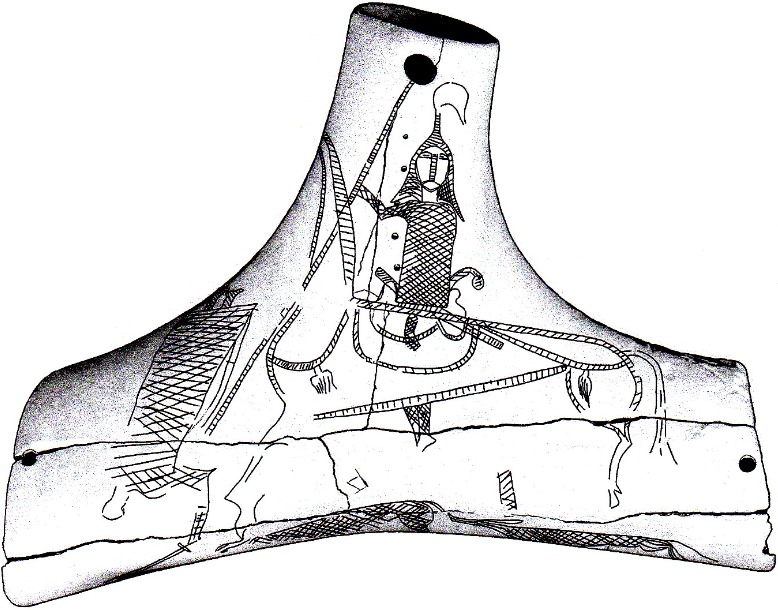 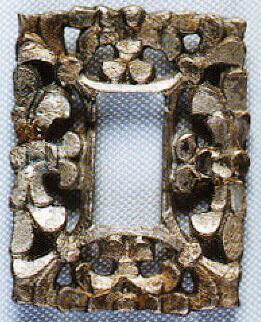 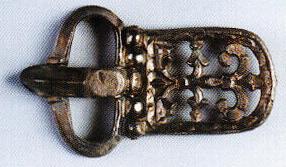 Photographs of pieces of Khazar silver belts. (Source: A. A. Ivanov, V. P. Kopilov, and S. A. Naumenko, "Poyasnie narodi iz kurganov khazarskogo vremeni mezhdurech'ya Dona i Sala" in Donskaya Arkheologiya No. 1(6) (2000), plates between pages 56 and 57 with relation to the article on pages 81-90.) Here are more photos of the belts. 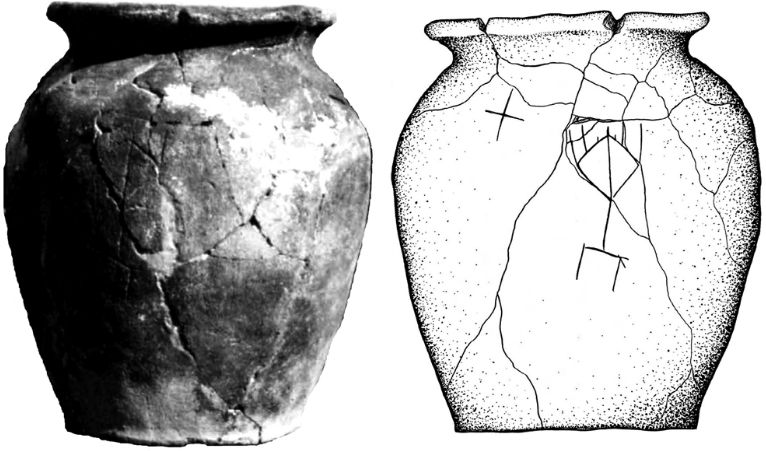 Photograph and drawing of a Khazar-era pot found in Mariupol in southeastern Ukraine that depicts a Jewish menorah and a plus sign that was interpreted as a Christian cross by Kravchenko and Kul'baka. (Source: Eduard Ye. Kravchenko and V. K. Kul'baka, "O nakhodke sosuda s graffiti v Mariupole" in Arkheologicheskii al'manakh No. 21 (2010), page 389.)

Khazarian antiquities (including ornaments and weapons)

History in Fragments: A Genizah Centenary Exhibition - includes photos of the Schechter Letter

Artifacts from the Verkhne-Saltovsky and Dmitrovsky (8th-9th centuries) burial grounds of Khazaria in the Hermitage Museum - this photo by Svetlana Ryzhakova was uploaded on June 17, 2010 here.