THE KHAZAR FORTRESS OF SARKEL

Last Updated: July 8, 2006
This page is Copyright © 1997-2003 by Kevin Alan Brook, all rights reserved. Unauthorized reproduction of this page is prohibited. Of all of the excavated Khazarian cities, the one which provided the richest material remains was Sarkel, which was flooded in 1952 upon the completion of the new Tsimlyansky Reservoir. Archaeological work at the Sarkel site was never fully completed, and it is not possible to conduct further studies. Nevertheless, the existing data recovered from Sarkel provides valuable clues to the Khazarian culture. We are indebted to the reports of Soviet archaeologists -- including Mikhail I. Artamonov, Svetlana A. Pletnyova, and Pavel A. Rappoport -- who explored the artifacts and architecture of Sarkel during the 1930s, 1940s, and 1950s.

The grand fortress of Sarkel, located near the Don River, was built in the 830s by a joint team of Greek and Khazar architects. Its Turkic name, sar-kel, means "White Fortress", and was named this because the fortress' bricks were made of white limestone. Some of the bricks from the Sarkel site were decorated with Turkic tamgas (tribe symbols) or images of horses and armored riders. 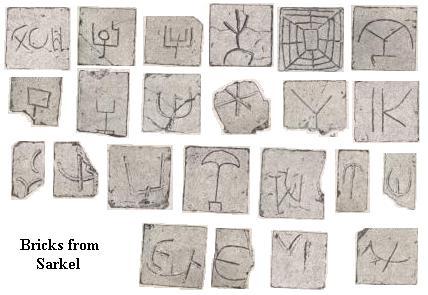 Sarkel's fortress had 4 towers and 2 gates, and a citadel was located in its south-eastern section. Its garrison consisted of 300 Turkic guards. However, Sarkel also served another purpose, in addition to military defense: its strategic location led it to become a major center of trade. Sarkel linked to the famous overland trading route known as the "Silk Road". Caravans would often pass through the region, and in fact the remains of Sarkel caravanserais have been identified, each consisting of (1) rooms for visitors, (2) an area for holding cattle, and (3) a courtyard where the caravans were kept overnight. 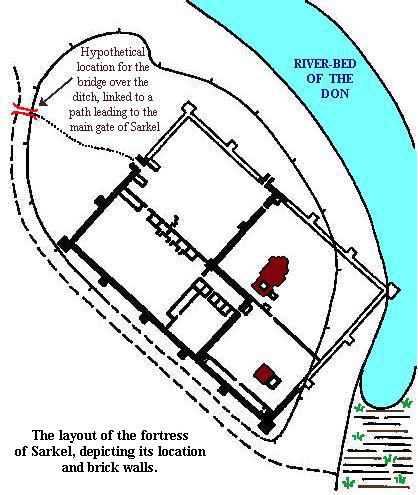 Besides the commercial and military sections of Sarkel, there were also residential areas. The houses in Sarkel originally had an open hearth in the center, but by the 10th century many of the houses had more advanced stoves and they were located in a corner rather than in the center. It appears that Sarkel's population consisted of Shamanists, Jews, and Christians.

Many productive activities took place in the vicinity of Sarkel. The remains of forges and potter's workshops were identified by archaeologists. Thus, much of the kitchenware, jewelry (bracelets, rings, earrings), belt-buckles, and pottery used by the residents of Sarkel was produced locally. However, a substantial amount of non-local goods was imported into Sarkel, both from other Khazarian industrial centers (e.g., the Crimean and Taman peninsulas) and foreign countries (e.g., the Byzantine Empire). 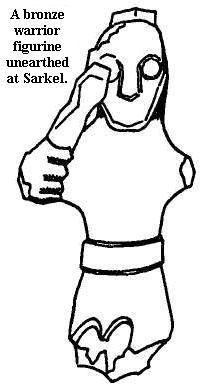 Many graves were excavated at Sarkel and the nearby Tsimlyansky site across the Don. The human remains were mostly European types, but some Mongolian types also were found. Animal bones (for example, those of dogs and horses) were also found.

The Grand Prince of Kievan Rus, Svyatoslav Igorevich, took over Sarkel in the year 965. The Russian Chronicle recorded the conquest of Sarkel as follows:

"Svyatoslav went to the Oka and the Volga [rivers], and on coming into contact with the Vyatichians [a Slavic tribe] he asked them to whom they paid tribute. They answered that they paid a silver piece per plowshare to the Khazars. When they [the Khazars] heard of his approach, they went out to meet him with their prince, the kagan, and the armies came to blows. When the battle thus took place, Svyatoslav defeated the Khazars and took their city of Byelaya Vyezha."

Byelaya Vyezha, the East Slavic translation of sar-kel, also means "White Fortress". After destroying Sarkel, the Rus'ians rebuilt the city and it once again served as a vibrant trading post.

In 1117, a group of "byelovyezhitsi" from Byelaya Vyezha settled near Chernihiv and established a new town called "Byelaya Vyezha" which was named after their old hometown along the Don River. 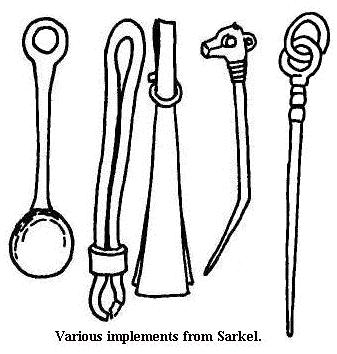 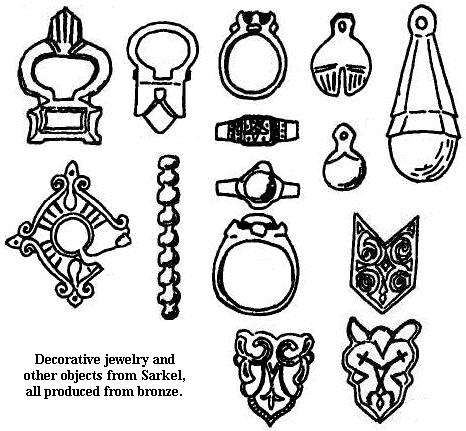 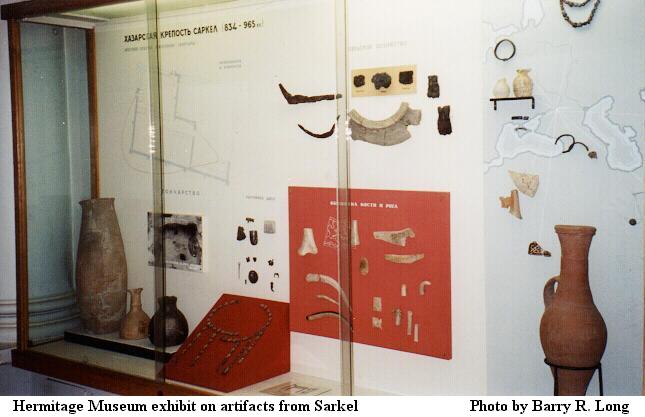 An inscription in Turkic runes from Sarkel, apparently of Bulgar manufacture
Another image of this inscription

Elephant chess piece made of ivory, found at Sarkel, housed at Hermitage Museum in St. Petersburg

SUGGESTED READINGS
For additional information about Sarkel, we recommend the following works:

"The Jews of Khazaria" by Kevin Brook contains information on the Sarkel Fortress as well as other fortresses and cities in Khazaria.